Australia’s leading esports team, The Chiefs, were hot favourites ahead of the League of Legends (LoL) OPL Final. To promote Logitech G’s sponsorship of both The Chiefs and the Final itself, an activation, supported by social media activity, would be required.

The LoL OPL Final at Luna Park, Sydney, needed to be a central feature of the activation, in order to maximise engagement and reach on social media.

In order to leverage this major esports event, UMM would need to develop and implement both an online call-to-action, in the form of a Facebook competition, and a real-world, money-can’t-buy experience involving competition winners.

This activation would also need to be covered and amplified through the Logitech G social media channels. 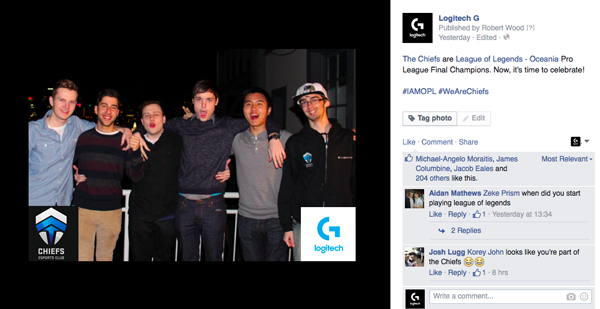 A strategically targeted Facebook competition ran over the course of a week (July 27 – August 3) to reach the optimal audience.  Ten lucky winners (each winner received +1) were granted the unique opportunity to watch the Final live in a VIP apartment, followed by a meet-and-greet with The Chiefs.

UMM transformed a luxury hotel apartment at Pier One Sydney Harbour into The Chiefs’ Apartment. A massive viewing screen, Logitech G blue lighting, bean bags, a ping pong table, and other entertainment fixtures were bumped-in to cater to the target demographic, creating a plush yet dynamic space for winners. From the balcony, guests had a spectacular view of Luna Park, the location of the Final.

Post-broadcast, the apartment would become a VIPs-only after-party, with food and drinks, beer pong, and music. This component of the event further forged the bond between The Chiefs and Logitech G, while adding another dimension to the competition winners’ exclusive experience.

UMM’s integrated communications agency offering was again on display through the collaboration between the Activation, Influencer Branding and the Social Media & Online Publishing departments.

On Twitter, total reach of posts (pre-, during, and post- event) was 242,092 (07/08 – 12/08). Among other Twitter activity highlights were retweets from EFTM, League of Legends Oceania, The Chiefs, individual members of The Chiefs (Spookz and Swip3rR), and The Chiefs managers Frank Li and Amy Lau. This formidable Twitter activity demonstrates Logitech Australia’s dominance of the online conversation about the LoL OPL Final in the lead-up to and also throughout the broadcast. Of note is the fact @Logitech_AU were first to congratulate The Chiefs on their victory at the event.

The event reached capacity (approx. 65 people) upon the arrival of The Chiefs, as well as formidable social media gaming personalities Loserfruit (124K followers on Twitch), Fasffy (10k followers on Facebook), and esports personality Snoopeh (181K followers on Twitter). A successful cross-promotion occurred between UMM clients Logitech G and Tsingtao, who supplied beer for the viewing party and after party.

In the week following the event, an esports news item appeared as the top story on The Sydney Morning Herald Online with The Chiefs member Raydere featured as talent. This organic publicity for The Chiefs and Logitech G was amplified via the brand’s Facebook page.